This car arrived at our workshop as a non runner. Various other garages had tried to get to the bottom of the problem without success.

It was dead on the key, so the starter circuit was the logical place to start. All fuses and connections were tested first, all proved ok. A serial scan came back with communication and canbus issues and we couldn’t communicate with the engine Ecu at all.

Accurate wiring diagrams are essential and it was found that the Starter motor is fed from the ecu. Access was gained to the ecu so we could check supplies and earth’s. Several supplies were missing.

Theses supplies came from the main ignition relay. This relay is a switched negative, this negative supplied by the ecu. So it seems that the ecu receives the signal from the key, it accepts the key if correct then trips this relay to wake up the rest of the ecu.

So now it was a case of tracing this wire from the ecu to the relay. After some stripping and probing 3 breaks were found in the loom, 2 near the ecu which in these cars are situated low near the wheel arch and can be susceptible to water damage if the plastic guards get damaged.  The other break was in the engine loom underneath the battery tray again where it can be exposed to the weather. 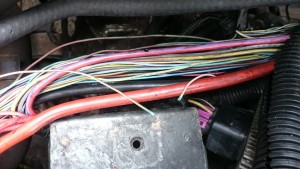 This is the break under the battery tray 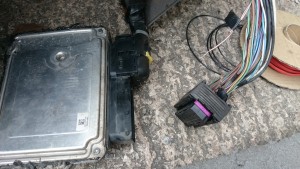 The breaks near the ecu seen here above the ecu plug