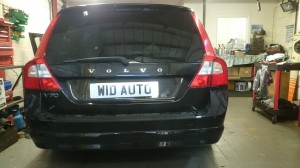 Today into our workshop was this 2009 volvo V70. The customer had broke down in Scotland on holiday,the history with the fault was that the car had gone flat over the period of a couple of hours the AA had come out to it and got it going and couldn’t find any faults with it. The car had been Ok for a couple of days but then had been completely dead. A local garage had been out to it first saying it was the battery,that hadn’t worked so they then put a startermotor on and that hadn’t worked. The garage then recommended taking it to a volvo dealer, but because the customer had used us with success previously he wanted it recovered to our workshops. The first thing we did was to plug in our diagnostic machine there were various voltage related codes and ecu communication codes. One thing we have come across with some later Volvos is if the battery voltage drops it can corrupt the immobliser and the system would need a reflash (reprogram of the ecu). This was our initial thought because of the flat battery a couple of days earlier. So to confirm this the easiest place to start was the startermotor circuit. We fed the starter direct and it cranked over but still didn’t start. So we started tracing the circuit to find out where the power for the starter comes from. The starter is fed via a main ignition relay,we linked out this relay and hey presto!the vehicle started. So now we had to figure out what triggered this relay. With the correct wiring diagrams we worked out that once the ignition key is inserted the BCM confirms the key is correct and activates part of the ECU which then sends out a negative to this relay which in turn sends a positive feed back to the ECU activating the rest of the system starting the car. So with a pin diagram for the ECU we traced the wirer to the ignition relay and a break in the wiring was found under the airbox caused due to a cable tie holding the loom too tight and crushing the loom.
As you can see the modern vehicle is a complex machine with many modules and ECU’s that all have to be communicating successfully for the car to work. Here at WIDNES AUTO ELECTRICAL we are specialists at this kind of work so you can be sure of a quick and cost-effective solution to your problems. 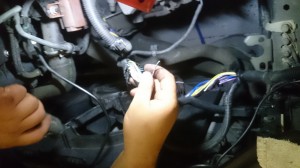