We are pleased to say we have invested in new equipment. This is the genuine dealer tool as used by Peugeot and Citroen dealers and now since PSA bought Vauxhall, Vauxhall aswell.

Here at WIDNES AUTO ELECTRICAL we are specialists in engine diagnostic and fault finding its what we’ve specialised in for over 30 years. We have invested thousands of pounds in the latest technology to be able to diagnose faults within all the electrical systems on all major car brands. So if you have problems with ESP, ABS, AIRBAG, TRACTION CONTROL, ENGINE MANAGEMENT we can help you sort it out quickly and cheaply.
We are also specialists in wiring faults.

If some electrical device isn’t working on your car it isn’t necessarily because the part is faulty, the associated wiring to the device could have a fault in it. We have the latest tools and 30 years experience in tracing faults within the vast wiring harnesses on todays modern cars and Vehicles

This 3 series came to us after the dealer said there was nothing wrong with it.

The alarm was going off intermittantly.

Testing the car seemed to show no faults .

But looking at the BMW site it showed a TSB (technical service bulletin) for this fault. The switches in the door become worn with age and set the alarm off.

The solution is to reprogram the frm module and this gives the switches larger tolerances so alarm doesn’t go off.

This Ford came to us with a cluster fault which the previous garage couldn’t solve because they didnt have correct tooling.

With the replacement cluster fitted car failed to start due to cluster being part of the PATS system (ant-itheft system).

But with the correct equipment the job is straight forward

With coding complete the car starts and runs.

A older Renault came to our workshop with a running issue.

Various tests were performed and the ECU condemned. Due to high cost of new replacement part a 2nd hand unit was sourced. But due to immobiliser coding 2nd hand part wouldn’t allow car to start.

But with our equipment we have at our disposal we are able to Virginise 2nd hand part then code it to vehicle.

AUDI A4 with display fault on the instruement cluster.

We removed the cluster and replaced the faulty display.

2009 mini was in our workshop with airbag light illuminated.

But here at Widnes Auto Electrical we offer a repair service. We can remove your original unit and with specialist equipment repair your unit saving you 100’s pounds

With the chip resoldered onto the pcb and refitted to the vehicle, the airbag faults are cleared and the light extinguishes.

Here at Widnes Auto Electrical we’re fully aware of all of the problems/issues that can be encountered whilst dealing with the various different types of lighting on the inside and outside of your auto-mobiles. From headlights, to tail-lights to inside car lighting. We’re the best in the Widnes area at dealing with all of the kinds of Lighting Faults that you may encounter just by being a regular day-to-day driver. We however do offer an initial go-to piece of advice on how to deal with the menial lighting problems, as long as you’re fairly savvy when it comes to electrical equipment.

However, we understand that not all people are, and not all people have the time to spare to deal with issues like this. That’s why we do offer a service, and you can come in and we’ll help solve your problem through pure mettle, rather than the sweat off your back. So, if you are having any problems with the lighting with your car, then contact us, as soon as you possibly can, we don’t want to keep you off the road, and if you’re living in the Widnes area, then you should know that we’re the best around. Or if you would like to see what other Car Electrical services we provide then please click here

Here are the most important warning lights you should watch out for:

Your vehicle’s brakes are arguably the most important feature on your car, so if there’s a warning light flashing on your dash highlighting there’s something wrong with the braking system, it’s best to get it checked out right away.

If your engine warning light is illuminated, often it’ll be accompanied by some unusual symptoms – these could include a lack of power, as the car has gone into ‘safe’ mode to protect itself; an intermittent stuttering as you press the accelerator, caused by a misfire; or another fault which could alter the normal response from the engine.

Sometimes this can be down to something as small as a faulty electrical sensor, although sometimes it can be a larger mechanical issue. If your car’s engine warning light is showing, get a professional mechanic to look over it straight away, as driving around any longer could cause further, and potentially irreparable damage.

The invention of the airbag was a major step forward in vehicle occupant safety, so if your car’s isn’t working properly, get it seen to.

A faulty airbag potentially won’t go off in a crash, meaning you and your passengers won’t be as well protected from any potential injuries. The other possibility is that your vehicle’s airbag could deploy when you least expect it, giving you a nasty shock – or even actually causing­ an injury – and an expensive fix to put right.

If your car’s power steering warning light – often known as the EPAS light – is illuminated, it means there could be something wrong with the steering system.

If the system fails, the steering could go heavy, meaning more effort will be needed to make the car change direction. This can be an annoyance at low speed when you’re trying to manoeuvre, but a real risk at higher motorway speeds if you need to make a sudden lane change to avoid an obstacle.

Most modern diesel vehicles are fitted with a diesel particulate filter, which removes harmful soot from the exhaust gases to reduce emissions.

If this is faulty it’ll trigger a warning light and could not only mean you’re releasing a toxic cloud of black smoke every time you press the accelerator, but that you could be causing damage to your engine. Get this checked out straight away as DPFs can become blocked and can be expensive to replace.

Without any coolant, your car’s engine would get so hot it’d effectively ‘weld’ itself together. If you see the coolant light show up on your dashboard, it could mean coolant levels are running low, so check the gauge on the side of the coolant tank under the bonnet and top up if necessary.

In conjunction with a temperature gauge reading well into the red, it could mean your engine is overheating. This is either the sign of a larger problem – like a head gasket failure – or symptomatic of something less major, like a leak in the system somewhere, meaning you’re engine has run low on coolant and got too hot. Get it seen to as soon as possible to avoid a potentially expensive repair bill.

Just like your car’s water or coolant warning light, you might see an oil warning light flash up if oil temperature gets too high, the level is low or oil pressure too low. It’s the latter two you want to avoid at all costs.

Oil is what lubricates your engine, with the oil pump used to spray the fluid to all corners of your engine. If temperatures get too high, or even worse, level is low or oil pressure drops, the effectiveness of the lubrication can be reduced or lost all together.

The result? Expensive engine damage, so if you see this warning sign, stop and phone a professional right away.

Once the preserve of high-end, super-expensive luxury saloons, many more cars are fitted with tyre pressure monitoring systems today.

These systems can sense a deviation away from normal tyre pressures, signifying a puncture. Generally, the device will flash a warning light on the dashboard, highlighting you should take a look at your car’s rubber.

You should see your battery charge warning light when you first turn your car on, but if it doesn’t go out a few seconds after the engine starts, there could be a problem with your car’s electrical system.

This could be to do with a faulty alternator, faulty battery, a bad connection or damaged cabling somewhere in the engine bay. If your car isn’t charging its battery when moving (the job of the alternator), then you could eventually run out of electrical power and grind to a halt.

At worst, the light could be on due to an alternator drive belt braking. Other systems also use this belt – such as the engine coolant pump, or power steering – so the affects of a failure here could be compounded.

It’s not a game of connect four or warning light bingo – if your car’s dashboard is lit up like a Christmas tree, or even if there’s one, small blinking light on there, it’s important to get it checked out.

Regular servicing and maintenance can help protect your vehicle from firing off a fault, so keep a close eye on your car and its warning lights to save you money and avoid those expensive garage bills.

Have you got a warning light illuminated, or have you previously had a problem with your car signified by a telltale sign on the dashboard? How did you go about fixing it and what advice would you give to other motorists with a dash full of LED warnings? 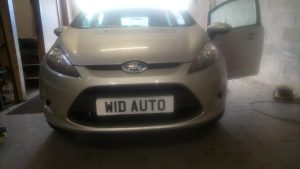 Tbis vehicle came to us with front wash fault. Rear worked fine and as this is a single motor with a direction valve the motor was obviously ok.

When front wash stalk pressed the motor remained dead. Plugging  in a diagnostic machine and looking at live  data it showed when stalk was pressed so we knew stalk is ok and the wiring to the BCM behind glove box is OK, so the trouble was either the BCM or wiring from BCM to the motor. With accurate wiring diagrams we can test wiring circuits and be sure of our diagnosis. In this case the wiring was ok. 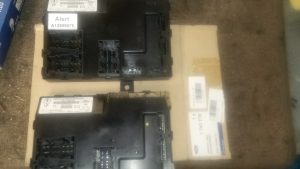 A new unit was sourced and programmed in to the car,  not a cheap part but we can be confident in our diagnosis process and can fit parts with confidence 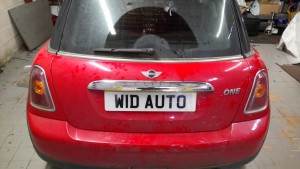 Recovered to us this Mini was a non runner. The recovery guy said it was a fault with the key. The steering lock would not engage and the ignition wouldn’t switch on. 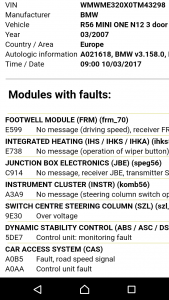 There were faults in various modules alot relating to traction control.

Knowing these systems we accessed the module and read live data 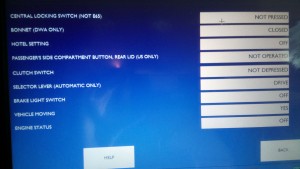 As you can see on this data the 2nd to last reading says the vehicle is moving. This is the reason the steering lock won’t engage.

The information from the traction control unit goes to the CAS unit behind the dash. Reading live data the 4 wheel sensors were ok. So knowing this system we know an open circuit can cause a false reading like this. With accurate wiring diagrams we were able to trace the correct wires and find a damaged wire in the loom. 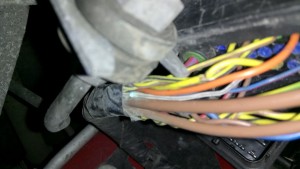 You can see green residue on the grey wirer where the copper core has oxidised and broke. A simple fix and the car is up and running again.

Only if your experts in the complex electronic systems on vehicles can you work out a fault like this.

Electric Cars have been presented to the wold as the future of the motoring industry for the last few years.  […]

We know that a lot of people need consistent maintenance to their vehicles, and that doesn’t fall short in terms […]