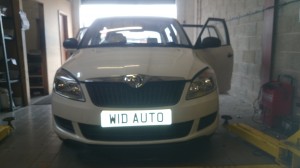 Into our workshop this week was this nice little car with abs faults. It had been into another garage for diagnosis and a rear abs sensor had been fitted, but the fault remained. The garage had then fitted a wheel bearing hoping that would cure the fault,but to no avail. So the lady came to us upset with this garage because they had fobbed her off having taken a load of money off her. So we started our investigation by plugging in our diagnostic machine and confirming the fault which showed up as a rear near side sensor open or short circuit. So the next step is to see if we are getting any signals at the sensor. We found one of the wires to be open circuit so now it’s a case of tracing the wirer back and finding the break. The cable runs up under the back seat then along the sill to the engine bay
. We removed the front passenger seat and exposed the wiring and found the broken wire in the sill. We bought a replacement loom repair section from SEAT cut out the bad section and refitted the carpet and.seat,cleared the fault codes and road tested to confirm the repair was good. A happy customer picked up the car knowing where to come in the future with electrical problems. 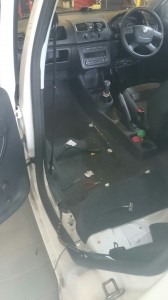 Summer is on its way 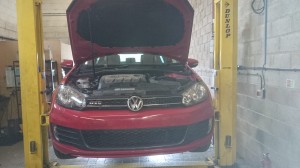 Into our workshop today was this VW GOLF with electric window trouble. We diagnosed it as a faulty mech and as you can see on alot of vw’s the door has to be completely disassembled to fit a new mech, not one for the faint hearted!
But another successful job and another happy customer. 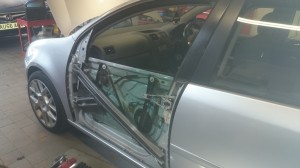 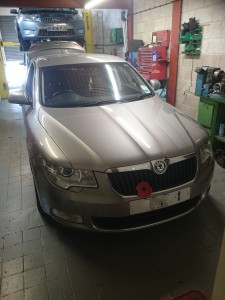 This lovely Skoda came into Widnes auto electrical today with the electrical problems with the electric boot release and closure. With these cars the boot and glass can be opened separately and in this case the glass wasn’t opening at all. So the first problem was to release the glass so we could gain access to the wiring. To do this we had to dismantle the locking mechanisms on both sides of the boot, which we did(not an easy job!!) then we could strip the covers off the hatch and access the wiring loom. We did our checks and found broken wiring in the hatch. We removed the loom from the car and replaced the damaged section and then began the process of reassembling the vehicle. Which took awhile but you have to make sure the locking mechanism is put together in the correct order or it just won’t work. Again the customer picked it up the same day fixed at half the price they were quoted from the agent. One happy customer 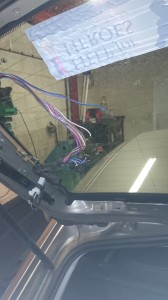 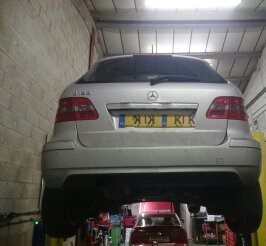 This 2011 B180 was brought to our workshop this week from another garage which couldn’t get to the root of the trouble. The problem was it was blowing a fuse intermittently which was then bringing on the battery light and management light. The previous garage had plugged the diagnostic into it and was getting a fault code relating to the stop/start alternator. The strange thing about this fault was that the fuse that was blowing was not listed as controlling the alternator circuit. The first thing we would normally do is to disconnect the alternator and see if that stops the fuse from blowing, but in this case the wiring is inaccessible unless the alternator is completely removed from vehicle.
The alternator was removed and checked and found to be ok. So we started to look more closely at the circuits that were controlled by this fuse even though they weren’t coming up on the diagnostic!
The circuits all related to the lambda sensors, purge canister solenoid and swirl flaps.
We could easily disconnect the lambda sensors and see if the fuse blew, which we did and found that the fuse still blew. The swirl flaps on this vehicle were vacuum operated so we couldn’t see how that would pop a fuse. But we got access to the control for the flaps and found we could move them very easily as a common fault with these is they can seize up due to oil and soot from the engine.
The only option for us now was to examine the loom from the main ECU in the engine bay, as wiring to this could affect unrelated circuits which might use a common positive connection. After a few hours of careful examination of the main engine loom a tiny nick on a cable which was not directly connected to any of the devices that was on this fuse or alternator was found across the top of the engine. The wirer was reinsulated and the loom refitted correctly so as to not cause problems in the future. The car was road tested and given back to the happy customer. 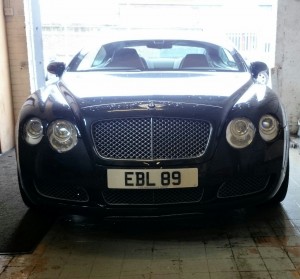 Today a lovely 2010 BENTLY arrived at our workshop with a host of electrical problems. The windscreen washers were not working and blower and headlights. The customer was not sure whether the faults started to happen at the same time or happened over a period of time. A quick look at the wiring diagrams told us that they weren’t connected by any module, therefore, we considered that they were each an individual problem. First we looked at the washers and found the washer pump to be faulty. A new one was sourced from the agent at only £28+vat!! Next the blower was checked and a wiring fault was eventually traced between the motor and control module so no new parts were required. Lastly the headlights were checked and a blown fuse was found to be the problem. We advised the customer that it could possibly be a short somewhere, but at this time its best just to take it and see how it goes. So another customer who was possibly expecting a huge Bentley sized bill went away happy. 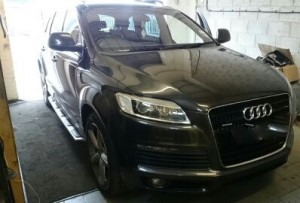 This Audi Q7 was brought into our workshop today with the customer complaining of various electrical systems acting strange and bad starting. A quick check of the charging system found the Battery to be faulty. So a new Battery was fitted which as you can see is not the easiest job in the world.
The passenger seat has to be removed to fit the Battery which means disturbing Airbag and other electrical devices connected to the seat which might mean resetting modules after fitment. But the customer was very pleased that it wasn’t anything more serious and went away happy. 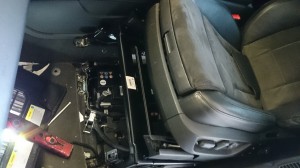 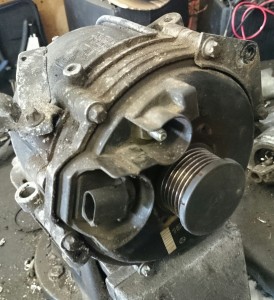 Brought to our workshops today was this water cooled Mercedes alternator which had stopped charging altogether. We were able to strip this down and effect a repair for a fraction of the price of a new unit. We load tested all the working components and found the regulator to be faulty, replacing this single item worked out at cheaper than half the price of a complete unit. 1 very happy customer picked up the Alternator 2hrs after dropping it off and fitted it back on and was on his way.

Today we were presented with audi with radio interference trouble that had been to various other garages for repair that had failed. The first thing we had to do is to repair the previous garages work, which entailed repairing the aerial lead that went into the rear of the head unit. Then we could investigate the original fault. The cabriolet A4 has 2 amplifiers in the boot lid and the cables running to them often break or corrode. So we traced the leads of which there are 3 and found the broken lead which is difficult to do as the break is usually internal and cannot be seen externally. We would then usually replace this lead but as time was a constraint we affected a repair on the lead which also saved the customer money. The customer went away happy with the radio interference rectified. 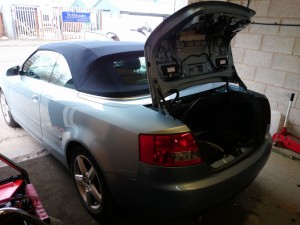 Brought to our workshop today from another garage was this very nice 58 plate Alfa Spider with a host of electrical faults. What we have found with this car aswell as most modern cars is water ingress into the wiring harnesses which then tracks along the loom until it reaches a plug or component. In this particular case the drivers door had water ingress which had got into the door module sending sporadic signals to the main BCM(controls most electrical systems on vehicle) which had affected its operation causing other systems to throw up faults. So you can see how hard a fault like this is to diagnose, one system completely separate from another still effecting its operation. But here at Widnes Auto Electrical our experience in these kind of faults enables us to diagnose and repair this fault. We removed the door module and wiring loom from the door and repaired both without the expense of replacement parts. A very happy and relieved customer picked up his car the same day fixed at a very reasonably price. 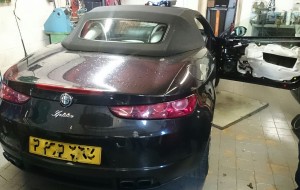